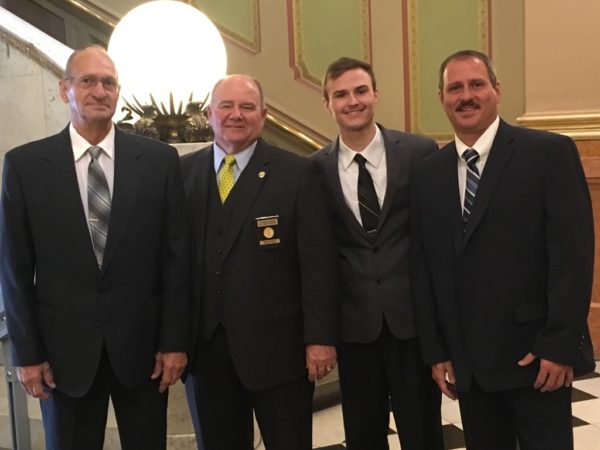 Since about March of this year, our Lodge, Orrstown Lodge No 262, in Orrstown, PA, has been working with Cumberland Valley Lodge No. 315 (which is the home Lodge of Brother S. Eugene Herritt, Right Worshipful Grand Master of PA) in Shippensburg, PA, to hold a joint Special Meeting for the purpose of conferring a 3rd Degree in the Egyptian Hall of the Grand Lodge of PA. A bus trip was planned to be sure all Brothers had a way to and from the Grand Lodge without the need to find parking. The day would consist of a tour of the Grand Lodge of PA, meeting with the Right Worshipful Grand Master and tour of his office. Cumberland Valley Lodge No. 315 would then open a Chartered Lodge in Egyptian Hall, Orrstown Lodge 262 officers would then take their position and confer a 3rd Degree to a 3rd generation Mason. The candidate’s father and grandfather would assist in his Degree, and when completed, the officers of Cumberland Valley Lodge No. 315 would retake their positions and close the Lodge. We requested and received approval from Brother S. Eugene Herritt, RWGM and the Grand Lodge Committee, and then scheduled the event.

The candidate, Brother Chandler K. Small, is a 3rd generation Mason, following in the path of his father, Brother Keith C. Small, and grandfather, Brother Ronald L. Reed. Brother Chandler is scheduled to enter the Air Force in September, so it was important he receive his Degree before leaving. Because of Brother Chandler’s HS graduation falling on the same day as Orrstown Lodge No 262’s extra meeting in May, his 1st and 2nd Degrees were conferred the same day at the June Extra Meeting with a Special Dispensation from Brother John D. Cook, DDGM of District 3. To receive his 3rd Degree in August in the Egyptian Hall of the Grand Lodge, a Special Dispensation from the Brother S. Eugene Herritt, RWGM of PA was requested and granted.

On August 17th, both Lodges traveled together to Philadelphia. After meeting the RWGM upon arrival, the Brothers enjoyed a tour of the Grand Lodge and a private tour by the RWGM of the Grand Master’s office. The Brothers then made their way to the Egyptian Room for the meeting where Brother R. Clem Malot, WM of Cumberland Valley Lodge 315 opened a Special Meeting of the two Lodges, where during the meeting, Brother Drew S. DeWalt, WM of Orrstown Lodge No 262 took his position in the East and conferred the 3rd degree on Brother Small. 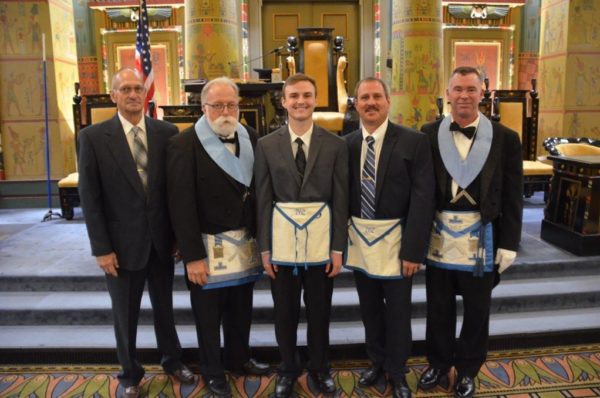 In attendance for the Degree was Brother John D. Cook, DDGM of District 3 (the home District of both Lodges), Brother Keith B Doyle, DDGM of District 50. Brother S. Eugene Herritt, RWGM met the with the candidate Brother Chandler K. Small in the Preparing Room, at which time he explained the rarity of the day’s event and imparted words of wisdom for the soon to be Master Mason. The RWGM then attended the opening of the Lodge, where he spoke briefly with the Members before departing to greet other Lodges visiting the Grand Lodge. Brother Chandler K. Small was assisted in his Degree by his father and grandfather. As is a new tradition in Orrstown Lodge, at the end of the 3rd degree, Brother Carl F. Calder, Secretary of Orrstown Lodge No 262 presented the Bible that the candidate took all 3 of his oaths and obligations on. His Bible being even more special, was signed before the meeting by the RWGM, the candidates father, grandfather, the DDGM’s and all those in attendance which included Brothers Dennis R. McClanahan, P.M. #143, Principal District 3 SOI; Barry D. Farner, P.M. #143, Vice Principal District 3 SOI and Aide to the RWGM; Richard L. Auchey, P.M. #348, Vice Principal District 3 SOI. In all, Brothers from 4 Lodges of District 3 (143, 262, 315, 586), 2 Lodges of District 42 (336, 348), and 1 Lodge of District 50 (622) attended the Special Meeting. Cumberland Valley Lodge 315 officers then took their places again and the Lodge was closed harmony.