At the January Stated Meeting of Orrstown Lodge #262, 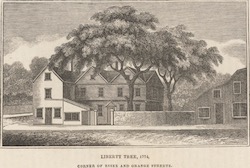 What is a “Liberty Tree”? The Liberty Tree (1646–1775) was a famous elm tree that stood in Boston, Massachusetts near Boston Common, in the years before the American Revolution. In 1765, colonists in Boston staged the first act of defiance against the British government at the tree. The tree became a rallying point for the growing resistance to the rule of Britain over the American colonies, and the ground surrounding it became known as Liberty Hall. The Liberty Tree was felled in August 1775 by Loyalists led by Nathaniel Coffin Jr. or by Job Williams.1  Thomas Jefferson did the most to make the Liberty Tree a lasting metaphor, with his 1787 letter that declared, “The tree of liberty must be refreshed from time to time with the blood of patriots & tyrants.”.2

The last known Liberty Tree was the 400-year-old tulip poplar on the front lawn of St. John’s College in Annapolis, MD, and was the nation’s last surviving Liberty Tree of the original 13 — one in each of the colonies — under which colonists gathered in the 1770s to incite rebellion against the British. It was damaged by Hurricane Floyd in 1999 and felled after. To observe the 250th Anniversary of our nation’s founding in 2026, Pennsylvania Freemasons have partnered with the PA Semiquincentennial Commission (America250PA) to sponsor the planting of a Liberty Tree in each of the 67 counties across the Commonwealth. Seedlings from the last remaining tree in Annapolis, Maryland, have produced hundreds of descendants that will be planted throughout Pennsylvania over the next several years. 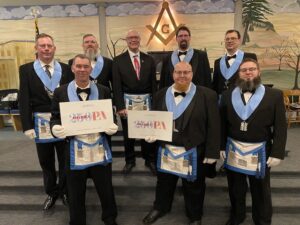 Each tree will have a plaque indicating it was sponsored by Pennsylvania Freemasons, in cooperation with America250PA. Currently, one is in the process of being approved in Franklin County with the proposed location being in Chambersburg, at Chambers Fort Park, pending final approval. Brother Thomas, PM, spoke in depth about the program and planting in Franklin County. This will be a Grand Lodge Masonic event. Orrstown Lodge is excited about the program and looks forward to the dedication.

To learn more about the Liberty Tree Program, America250 PA, or to have Brother Thomas, PM, speak at your Lodge, contact him at 717-496-6156 or via email at bobtom72@gmail.com